This year 4582 DDb records were made, the highest number since 2014. This was largely due to the efforts of Sarah Cowan, who on regular walks mostly near her home in Kildonan visited 27 monads, mostly several times, making this the best-recorded area on Arran.

Being almost entirely confined to Bute I undertook three local projects. In spring I looked at dandelions along pavements in town and (Erythrosperms and Celtica mainly) on a short section of coastal grassland in the west of the island. In later May and early June I was able to revisit all the known hawkweed sites on Bute (mostly coastal crags) , and with help from referee Brian Burrow all specimens including the abundant town plants were identified, confirming some older records and adding a few new ones. By June all exposed sites were seriously droughted.  My only sorties off island were for brambles, firstly a day to meet up with two Ayrshire recorders in Kilbirnie and in August a four-day visit to Galloway when four other recorders were able to join me in the field to investigate the brambles of the Kirkcudbright area. This was a happy and fruitful occasion, in splendid weather fortunately, as we could not meet indoors. Fifteen species were recorded.

The addenda pages to my Bute Flora are periodically updated, with a trickle of new species being found, and some other changes noted. https://bsbi.org/clyde-islands. 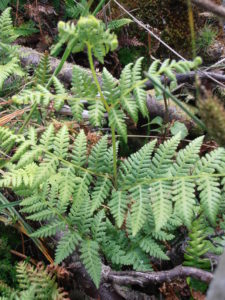 A substantial new population of this fern, so far known only from Bute outside its Australasian homeland, came to light after felling of a Sitka plantation in Cnocnicol wood (NS0960).  How long until it turns up somewhere else?