A total of 7781 records from 2021 have been added to the DDb so far, with a few more still awaited.  The largest number since 2014, this is largely due to the efforts of Sarah Cowan, who continued her recording of monads in the south of Arran. Around that coast the exceptionally mild climate supports a rich natural flora but also encourages the survival and spread of many garden outcasts, and Sarah has written an article on this subject for the 2022 Scottish Newsletter. Over 500 species have been recorded since 1980 in one tetrad (NS02F); of these 20 have not been seen since 2000, and these are nearly all arable weeds, providing clear evidence of the effects of land-use changes on the flora, since arable crops are no longer grown in the area.

For a second year I was unable to get to Arran, and since Bute remains well recorded, I visited vc76, recording a dozen monads around Wemyss Bay and Inverkip.  Surprisingly, Centunculus minimus (chaffweed) proved to be a first Renfrewshire record since 1813. My annual bramble workshop was based in Helensburgh (vc99); of interest was the rediscovery of Rubus adenanthoides, in the area near Rosneath where it was found by Alan Stirling in 1994. Over the season I helped to name many specimens from photos, principally of brambles, but including a wide variety of other species.  A substantial set of records from Greater Cumbrae was supplied by a visiting ecologist. 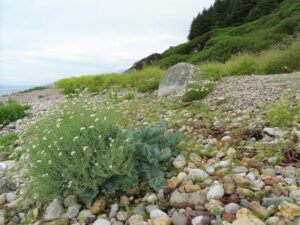 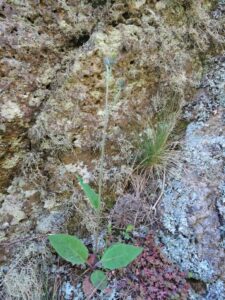