Tucked away in the south-west corner of Scotland, the old county of Wigtownshire forms a small vice-county, VC74. It covers only about 1263 square kilometres and its highest point is just 320 metres, all largely on Ordovician and Silurian rocks giving rise to generally acidic soils.

Wigtownshire is botanically most notable, perhaps, for its moorland habitats and long, beautiful and species-rich coastline. The human population is low (and falling) and botanists are few and far between.

VC74 contains 29 Sites of Special Scientific Interest, 18 of which have been notified at least in part for their botanical importance. Seven of the latter have also been designated as Special Areas of Conservation. There are presently no National Parks, National Scenic Areas or National Nature Reserves. Nature reserves are rather poorly represented. The RSPB has three (Mull of Galloway, Scare Rocks and Crook of Baldoon) and the Scottish Wildlife Trust one (Carsegowan Moss). Part of Wigtown Bay forms Britain’s largest Local Nature Reserve and the Woodland Trust manages Aldouran Glen Wood.

The climate in this part of Scotland is wet, but relatively mild, especially towards the extreme south-west. Here Logan Botanic Garden is famous for its range of exotic plants that can flourish because of the warming influence of the Gulf Stream.

Wigtownshire can for convenience be divided into three distinct areas, the Moors, the Machars and the Rhinns - more information about each of them below.

1209 taxa were recorded for VC74 in the Vice-County Census Catalogue, but no Flora has been published, only old and now difficult to obtain checklists. It is hoped that a new checklist will be published in the near future.

In the meantime updates on plant recording in Wigtownshire (VC74) will be made available and some nice photos can be seen on the Facebook pages for  Machars Botany and Wigtownshire Flora.

The Flowering Plants and Ferns of Wigtownshire (1990), Alan Silverside

The County Recorder is Michael Jeeves. 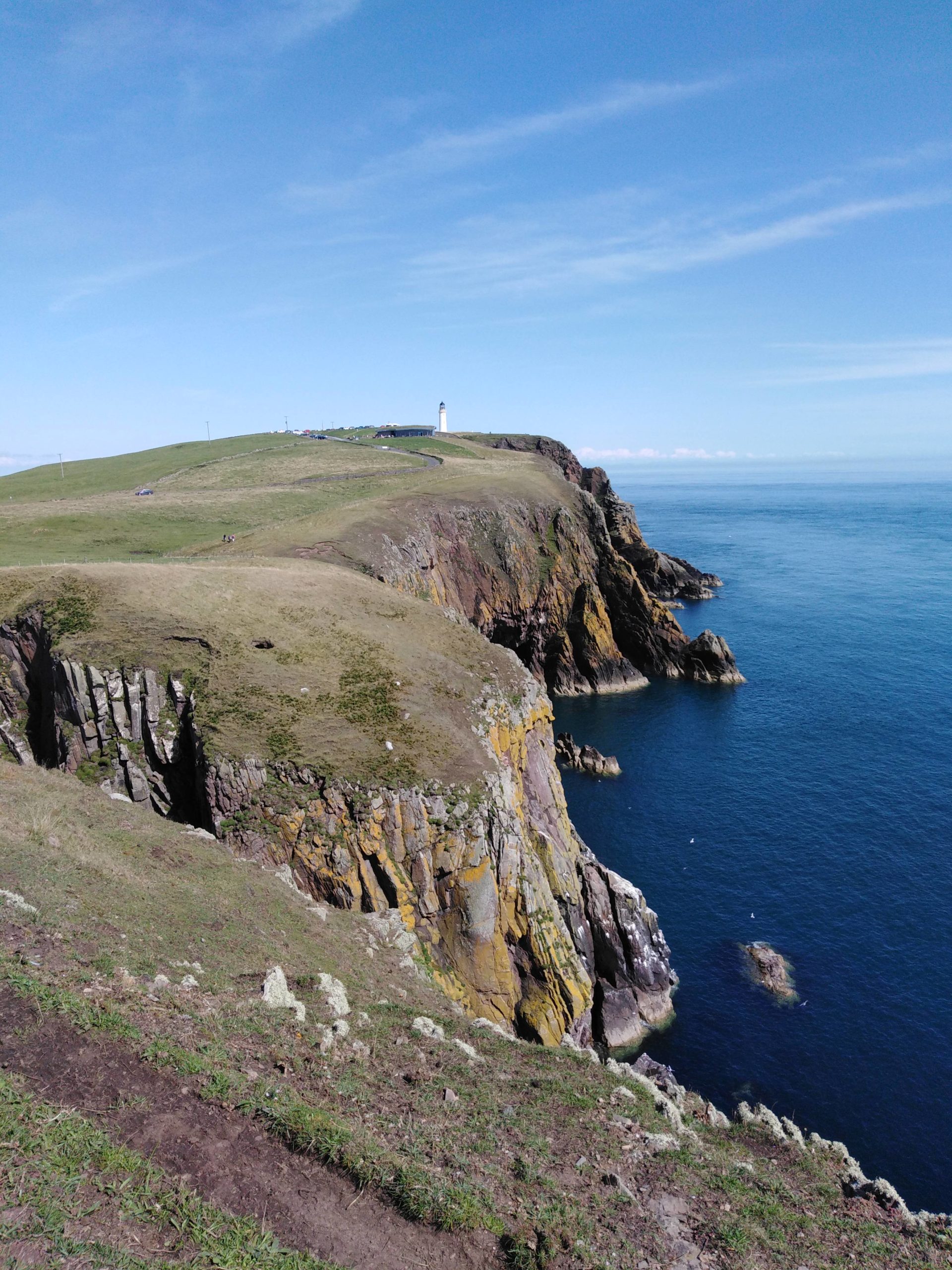 The Moors is located in the north and centre of the vice-county and consists of low hills smothered in blanket and raised bog, with occasional acidic lochs. It is drained by several fast-flowing rivers and burns. Extensive areas have been planted with conifers and windfarms pepper the landscape, but much of interest can still be discovered. In the bogs Cranberry Vaccinium oxycoccos, Bog-rosemary Andromeda polifolia and White Beak-sedge Rynchospora alba (image below) are characteristic and locally abundant plants, while rarer species include Great Sundew Drosera anglica, Pillwort Pilularia globulifera and Bog Orchid Hammarbya paludosa. 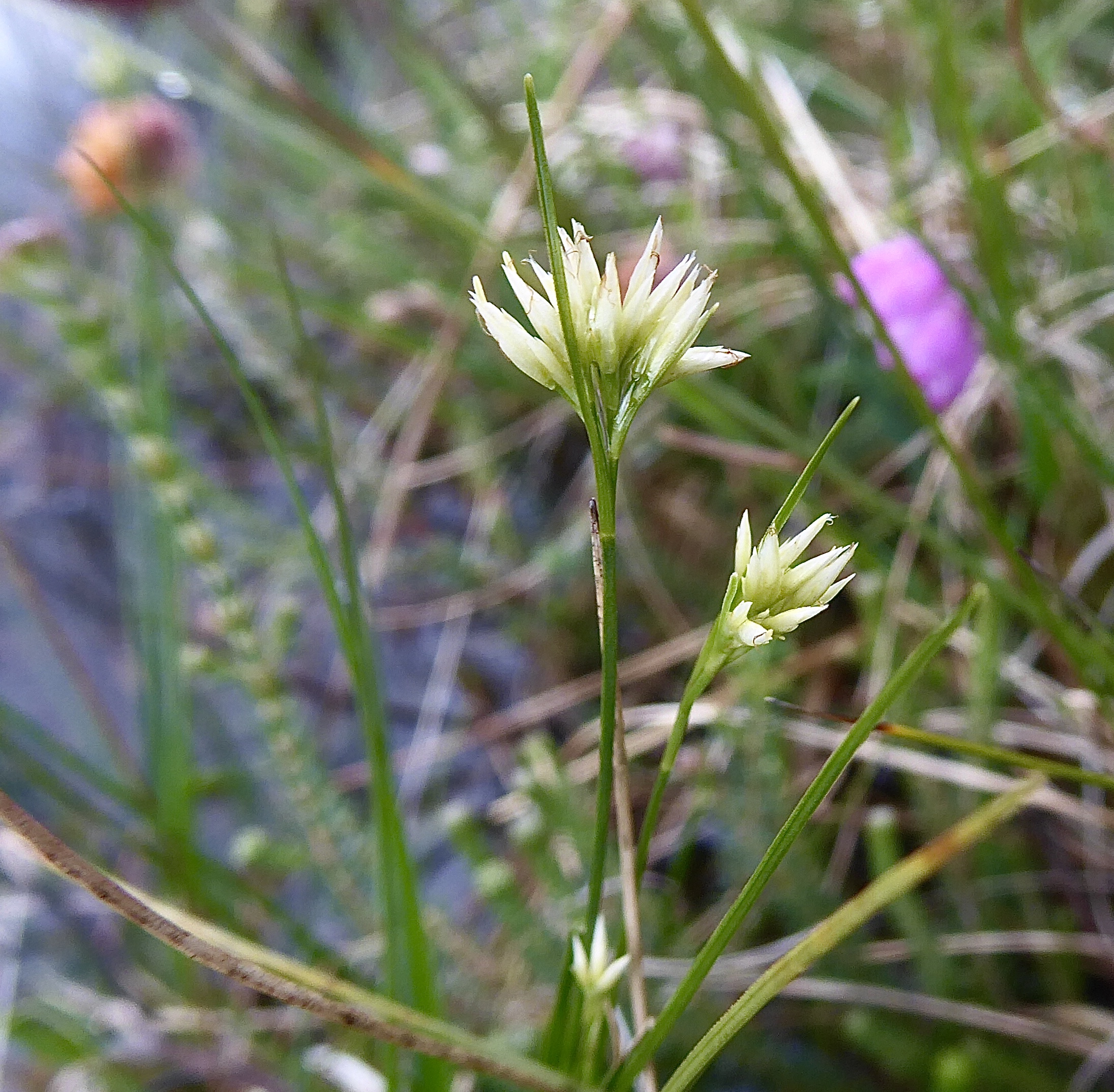 Water Lobelia Lobelia dortmanna is frequent in a few of the lochs, with various tricky to identify bladderworts also present. Tracks and associated ditches through the forest can be locally good for plants, holding species of heath and moor such as Lesser Skullcap Scutellaria minor and Heath Pearlwort Sagina subulata. Whorled Caraway Trocdaris verticillata is notable for being widespread and common in wet places in Wigtownshire and south-west Scotland in general.

The River Cree forms the eastern boundary of VC74. Globeflower Trollius europaeus and Elongated Sedge Carex elongata have been recorded in its valley marshes. Native woodland on the slopes, where it survives, contains much Ash Fraxinus excelsior and Wych Elm Ulmus glabra. 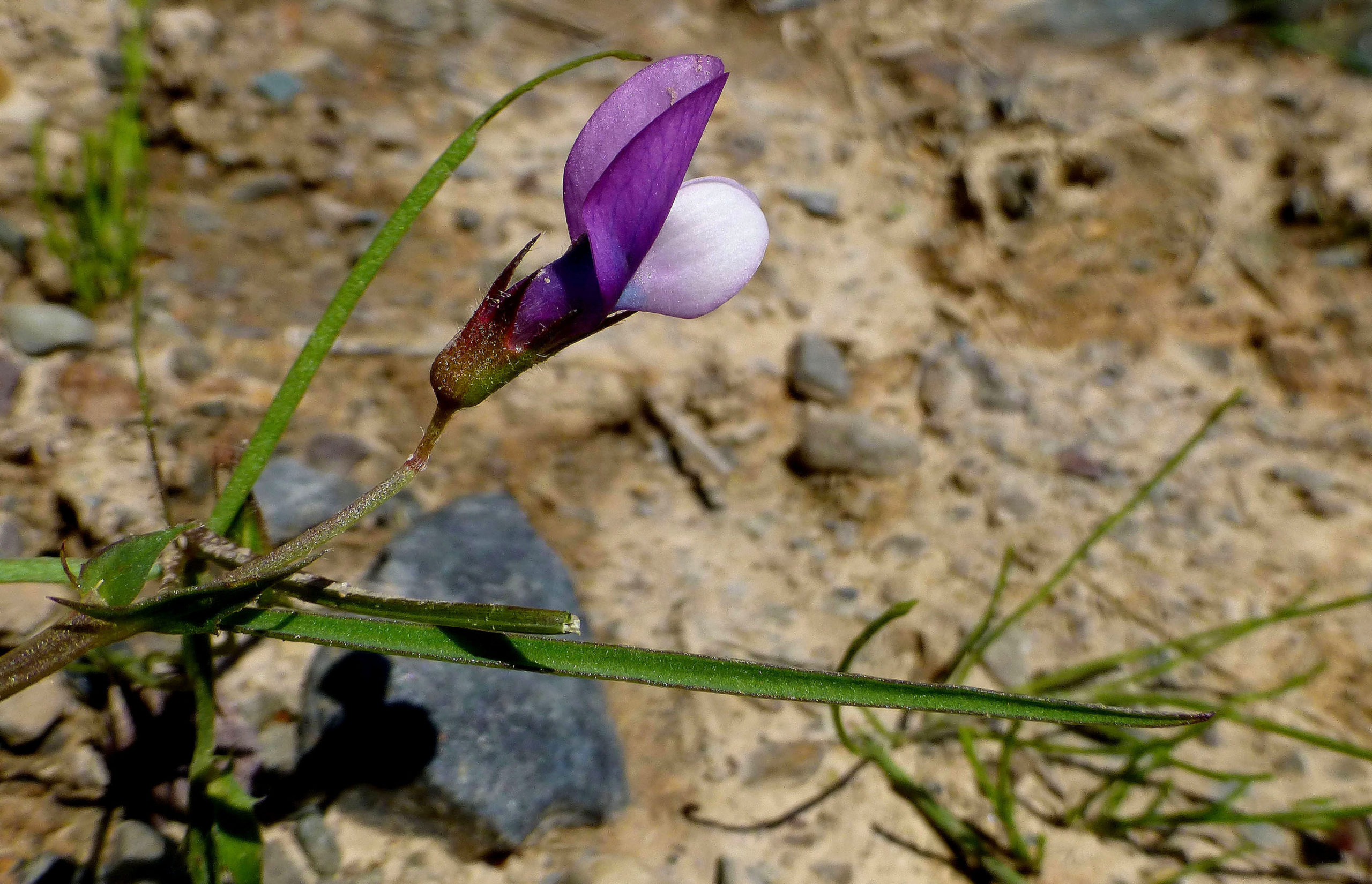 The Machars, from the Celtic ‘a plain’, although hardly that, is a substantial triangular peninsula that juts out into the Solway Firth. Much of the land has been agriculturally improved and lochs drained, although not all drainage schemes were successful and some good habitat remains. Great Fen-sedge Cladium mariscus and Six-stamened Waterwort Elatine hexandra are found in some of the lochs.

Native woodland is rare and where it does occur Ash and Wych Elm again define the stands. Broad-leaved Helleborine Epipactis helleborine is a local rarity of such woods. Hairy Buttercup Ranunculus sardous, a rarity in Scotland, is abundant in parts of an old, disused airfield at Baldoon.

The coastline is considerably more botanically interesting. On the east side of the peninsula there are extensive areas of saltmarsh flanking Wigtown Bay, with Lax-flowered Sea-lavender Limonium humile occurring where grazing is light or absent. The eel-grasses Zostera noltei, Zostera marina and Zostera marina var. stenophylla have also been found here. The saltmarsh gives way to rocky coast and then tall cliffs towards Burrow Head, at the tip of the peninsula. Here low-growing patches of Juniper Juniperus communis can be found on the cliff tops, with Purple Milk-vetch Astragalus danicus (image on right) amongst the colourful coastal plant community.

On the west side of the peninsula there are long stretches of shingle along the shore, backed by raised beaches and fossil cliffs, with taller cliffs again present towards Burrow Head. Some of the special plants to be seen along this coast include Oysterplant Mertensia maritima, Bithynian Vetch Vicia bithynica (image below left), Yellow-vetch Vicia lutea, Dotted Sedge Carex punctata and Ivy Broomrape Orobanche hederae (image below). 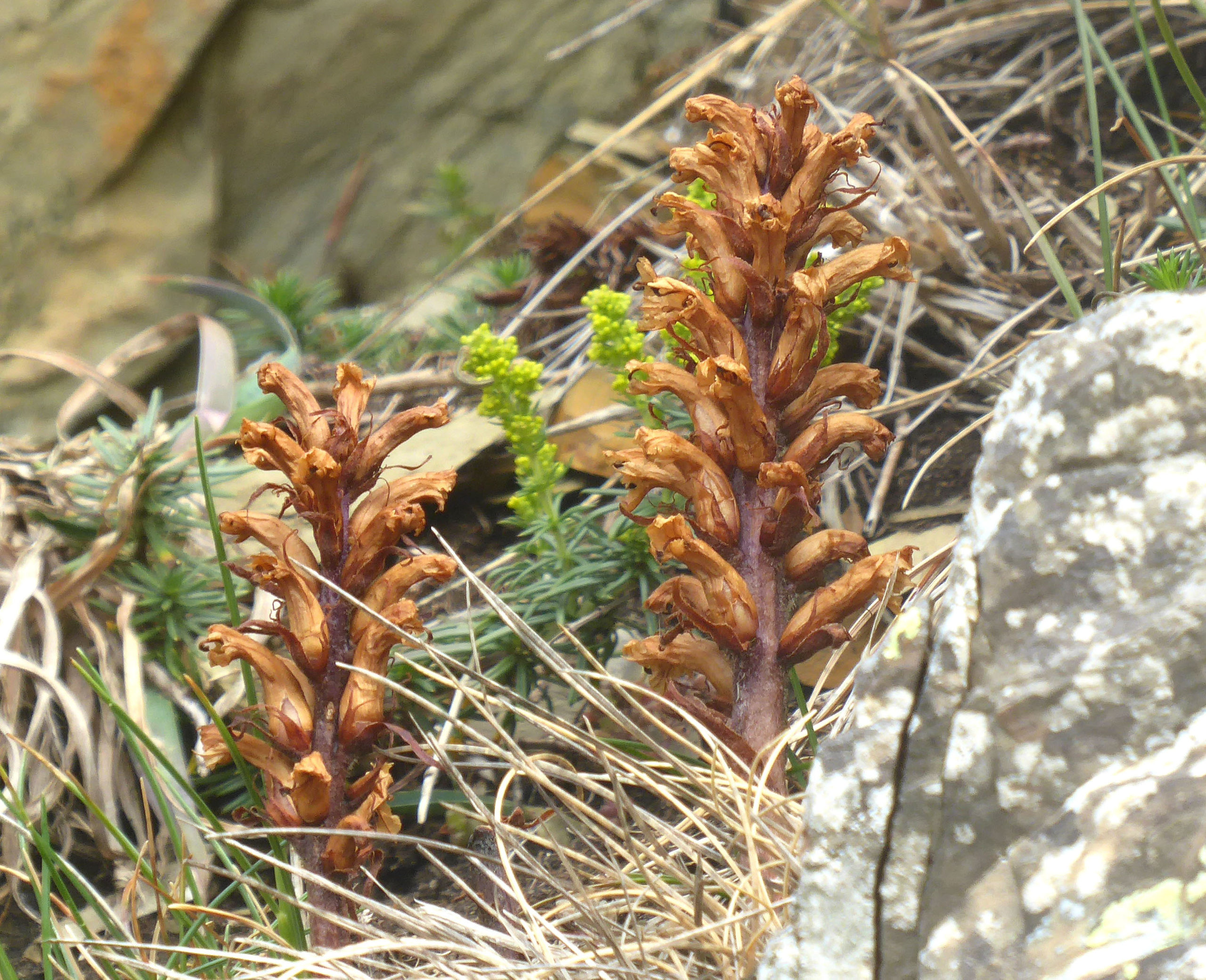 The Rhins (or Rhinns) of Galloway, from the Celtic rinn ‘a point or promontory’, is actually a long hammerhead peninsula, with the head pointing roughly south-westwards. The outer coast is wild and rocky, with heathland and grassland on the cliff slopes, interspersed with wet flushes and bare rock. Northern Ireland is visible a short distance across the North Channel.

At the northern end of the peninsula Corsewall Point is a spectacular, windswept place and to the east of the lighthouse there are populations of Scots Lovage Ligusticum scoticum on the rocks and Lesser Water-plantain Baldellia ranunculoides, Black Bog-rush Schoenus nigricans and Grass-of-Parnassus Parnassia palustris in flushes.

The Mull of Galloway, at the bottom of the peninsula, is Scotland’s southernmost point and it too occupies a wonderfully impressive location, with sheer cliffs and panoramic views. All four of VC74’s Nationally Rare plants, Purple Oxytropis Oxytropis halleri, Small Restharrow Ononis reclinata, Holy-grass Hierochloe odorata and the endemic Irish Sea-lavender Limonium recurvum subspecies humile, are found at or close to the Mull. 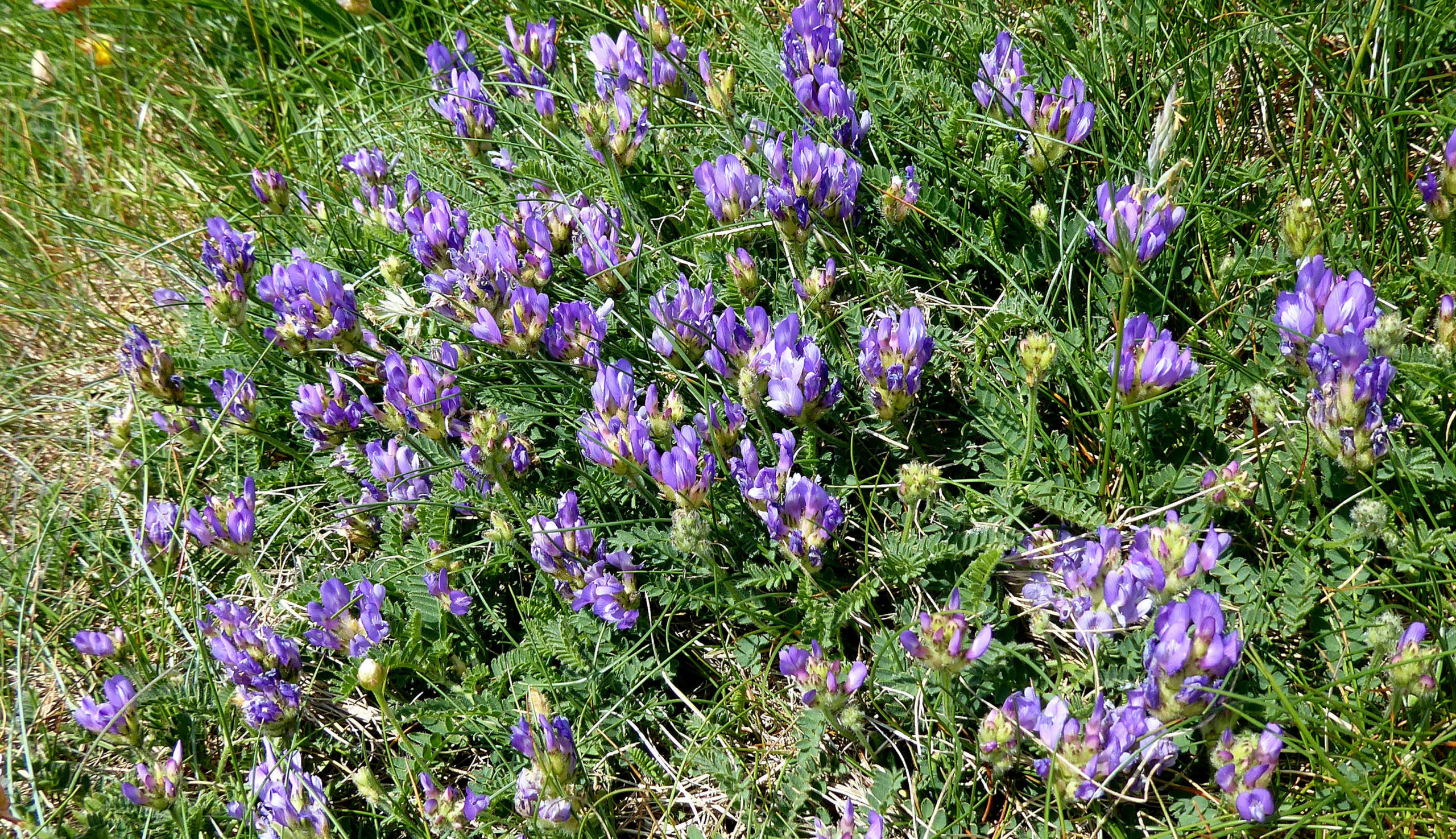 The eastern coastline of the Rhins has Loch Ryan at the northern end. Best known for its ornithological interest, this large sea loch also has eel-grasses, relished presumably by the wintering population of Pale-bellied Brent Geese.

To the south the eastern coastline down to the Mull of Galloway forms the sheltered western shore of Luce Bay, at the head of which is a long sandy beach backed by southern Scotland’s largest sand dune system, Torrs Warren. It is owned by the Crown Estates and is used by the M.O.D. The varied habitats contain many interesting plants, for example Cowbane Cicuta virosa, Smooth Cat’s-ear Hypochaeris glabra, Common Wintergreen Pyrola minor and Coralroot Orchid Corallorrhiza trifida.

Images on this page were taken by BSBI member and longtime Wigtownshire resident Alan Wake; they appear here courtesy of Alan.