Both Liz and Jane have recorded locally to their homes. Liz explored some of the road verges near Carnbo and found 70 to 100 species on each of two outings which was more diverse than the grass fields round about.  Jane discovered four more locations for Osmunda regalis (Royal fern) on Loch Ard, near Aberfoyle. They were alerted to a find of  Alopecurus aequalis (Orange Foxtail) on exposed mud at the western end of Loch Venacher, Callander so duly went to investigate and found it scattered over the large area of mud along with Apium inundatum (Lesser Marshwort), Eleogiton fluitans (Floating Club-rush), Lythrum portula (Water-purslane), Persicaria amphibia (Amphibious Bistort) and a small area of Crassula helmsii (New Zealand Pigmyweed).

Like many other records, we have missed getting out with other botanists, but hope that in 2021 that we again be possible. 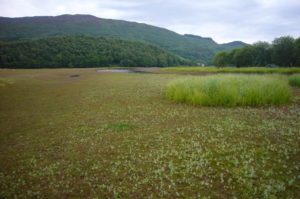