Many records in the Aberfoyle area have been at tetrad level, so in 2021 Jane started re-recording at monad level. Eleogiton fluitans (Floating Club-rush), Lycopus europaeus (Gypsywort) were all found and Osmunda regalis (Royal Fern) re-found on the exposed shoreline of Loch Ard when water level was extremely low in the summer.  Not so pleasing was another VC record for Crassula helmsii (NZ Pigmyweed) on a small fishing loch near Kippen Muir.

In 2016 Jane discovered Lycopodium inundata (Marsh Clubmoss) on the north shore of Loch Katrine. At the moment Forestry and Land Scotland are re- doing the Land Management Plan for the Katrine catchment and we are encouraging them to consider and protect this important population in their plan.

We would, in particular, like to thank Roy Sexton and Matt Harding for their contrubution of records in 2021. Roy for a continuous annual record of orchid numbers on several sites. In particular for his records from Braeleny (or the Commonty) near Callander which is a wonderful site with 8 species of orchids, more orchids than any other site in our vice-county, including our only site for Pseudorchis albida (Small-white Orchid) discovered by Roy and John Snodin.

And a special thanks to Matt for his record for Scandix pectin-veneris (Shepherd’s-needle), an incredibly rare arable weed in Scotland.  It was last recorded in VC87 as ‘near Culross’ by JH Balfour in 1850. In the ‘Flora of Perthshire’ by Francis Buchanan White, 1898 it is recorded as ‘common in Gowrie’. There are only 2 other Scottish records since 1970.

Photographed by Jane Jones on the shore of Loch Ard 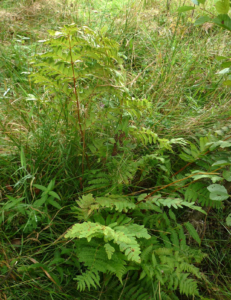 Photographed by Jane Jones on the shore of Loch Ard

Photographed by Jane Jones on a small fishing loch near Kippen Muir.