Recording activity was curtailed by COVID for locals and visitors, but Outer Hebrides Biological Recording supplied  a batch of records, and a ‘house party’ recording trip for three weeks in August was eventually allowed. This covered part of the west coast of Lewis which was relatively under-recorded, and contributed to recording for a new vc110 flora. There were interesting finds of Aster tripolium var condensatus, which provide to be frequent on the sea cliffs, Salix herbacea at low altitude (160m), and Hippuris vulgaris, not seen in this area since the 1940s. There were some scarce taxa too – Rumex × propinquus (twice) and Juncus tenuis (third record). Continued a debate with Pat Acock over the existence of Equisetum × dycei, but none of the specimens I provided (from a revisit to previous sites and from a new one) were it.

Calm weather and COVID effects on tourism allowed us to take a boat to the Flannan Isles and update records, but some tetrads remained inaccessible due to the swell. 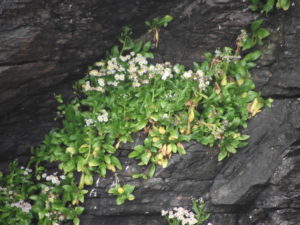 Aster tripolium var consensatus is a fleshy variety characteristic of rocky shores. It has been recorded in vc110 before on rocky offshore islands, but not on the main land masses. It proved to be widespread on the cliffs in NB24, even though there were no previous records here even for the species. In part this demonstrates how under-recorded parts of vc110 remain.