The first quarter of the year was spent entering and verifying data for the 2020 Atlas project. All South Lincolnshire Flora Group (SLFG) meetings were cancelled at the end of March, so botanical survey was limited, particularly as several older members were shielding. I spent much of April producing a draft Rare Plant Register for the county which will be finished by spring 2021, and will then provide a focus for targeted surveys before hopefully being finalised by 2025.

As restrictions on travel eased during the summer, some recorders got back out into their local areas. Malcolm Pool and Richard O’Conner visited approximately 50 monads and updated records for several key species, particularly Gentianella amarella subsp. amarella which had a good year. Sarah Lambert found a very large population of Verbena officinalis at Twyford Wood, only the fifth site in the vice-county.

The SLFG Facebook page provided a valuable means of communication for botanists during a difficult year, and allowed me to have some insight into what was going on in my vice-county, which I only visited a handful of times in mid-summer! Several notable finds were reported via this group, including several new Taraxacum species from a Holbeach garden. The spring lockdown did have the advantage of focusing botanists attention onto their local patch. 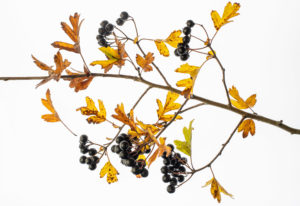 Three bushes were recorded in a hedgerow near Donington by J. Bodimead on 19th October 2020, the first record for VC53. They were presumably planted nursery stock, possibly sourced from eastern Europe.