The year began normally, when 5 attended the New Year Plant Hunts in Ballywalter and Hillsborough.

In late January David McNeill made the third record of Gnaphalium luteoalbum in H38.

In mid-March, Covid-19 was on the March. All recording for the remainder of the year was local to Portaferry and made either on my own, or with my wife, Julia Nunn.

In early June Sisymbrium orientale was found in Portaferry. In late-June, Ian Rippey sent a record of Aethusa cynapium from Kernan Lake, Gilford.

In early July, Galium album was noted persisting on a traffic island near Portaferry and in mid-July Dryopteris cambrensis was found nearby.

A first for H38, Symphytum asperum was recorded near Ballyhenry Island in late July.

In early August, Poa nemoralis was found in Portaferry park and Nugent’s Wood. Urtica urens, Lamium hybridum and L. confertum were found in a weedy crop near Tara.

David Miller sent photos of plants from Greyabbey and Montalto estate, Ballynahinch in July and August, from which comprehensive plant lists were compiled.

From September to mid-October, Zosteras, Atriplexes and Salicornias were recorded along the shores near Portaferry and Portavogie.

At intervals throughout the season, Rubus plants were examined and R. ulmifolius and R. latifolius were recorded in several monads. 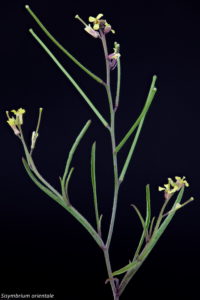