In 2021 two of the three VCR team were not as active as usual due to health problems but luckily the remaining VCR was able to do plenty of recording. The Dundee Naturalists' Society continued with evening meets and some day trips and a local 'wildflower group' was reconvened and held four field trips. They submitted useful records to the VCRs. Many interesting records came from the re-survey of candidate Local Nature Conservation Sites by Clare Rickerby and Theo Loizou.

An old 1914 record of Hymenophyllum wilsonii was re-found in Glen Esk (near the Mooran Ravine).  The population was in good condition and many hundreds of fronds were noted.  This is one of the more easterly populations of this pteridophyte in Scotland.

New populations of this species, only recorded in recent years from Kinnordy, were found at Red Loch and also at Powmyre.

This plant is extremely local in the county, but good populations were found along the banks of the River South Esk.

This is surprisingly scarce in Angus, but a few new sites were found at Den of Ogil Reservoir. 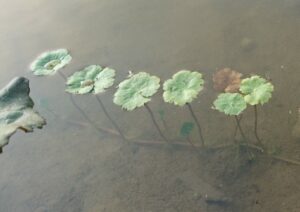 The first VC90 record (and 2nd Scottish record) of this highly invasive species came from a newly-created pond near Glen Isla. SEPA and NatureScot were informed, all plants have now been removed and the site will be monitored.