The Beds Flora Group managed a total of 14 field trips during the year. 3 of these were to private sites which had not been previously surveyed and which yielded some impressive records. One of these was to a large meadow recently acquired by the Wildlife Trust. Formerly horse-grazed it is adjacent to Flitwick Moor, a wetland site of national importance. Several specialities of the SSSI were recorded together with some unexpected finds.

I gave my first lecture on the county flora to a study group and realized that it was not as daunting as anticipated and represents a good means of ‘spreading the word’. It will not be my last.

NCR – a population of Galium parisiense numbering thousands of plants was discovered on private land during an ecological survey by a Recorder from outside the county. Frustratingly the site owner would not allow details to be released! 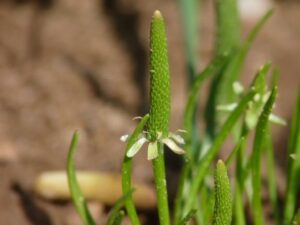 Recorded in VC30 for the first time since I saw the species in 1995. Since then I have found it several times outside the county, including a large population on the verge of the IKEA car park in Milton Keynes!