Progress towards our goal of making every tetrad at least 75% well-recorded was advanced by a botanical survey of the Belvoir Estate, mostly in the poorly recorded north-east of VC55. We made 14 visits and found 25 plants significant at local or country level, and 14 areas of high botanical interest.

A survey of six lagoons at Egleton Nature Reserve, Rutland Water, was undertaken for the Leics. & Rutland Wildlife Trust (LRWT).

Botanical surveys were made in several churchyards to support efforts to improve management regimes. At Peckleton, the usual mowing regime was suspended, and Harebells were spectacular in the summer, a plant that is becoming scarce elsewhere in the VC.

We have continued working with botanists from Rutland Natural History Society, visiting Seaton Meadows this year.

RP did local street surveys that produced several new county records. He has been digitising historical records from the LCC ‘field by field’ surveys (1988-2000: over 100,000 completed so far) and many more six-figure grid references for some of the rarer taxa mentioned in the last Flora of Leicestershire.

SFW and GH contributed to the 2021 Recorders Conference for VC55, hosted by LRWT on Zoom, by presenting a summary (delayed by Covid) of the Atlas 2020 project.

Several hundred plants were found along the edge of a roadside verge in Brooke, Rutland. First Rutland record since 1984. 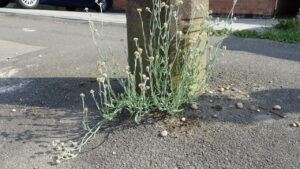 A population of about 15 mature plants and seedlings was found scattered along an urban street in Enderby. Second County record (FCR in 2009).

A stand was found in marshland on the Belvoir Estate. It is an RPR species, the third site since 2000, and a new hectad record.