Fife and Kinross-shire is part of the peninsula extending out between the Tay and Forth. The coastline of Fife is about 170 km and the area of v.c. 85 is 1307 km2. The West and East Lomond Hills dominate Fife and are eroded volcanic vents as at Kellie and Largo Law. The Ochils extend along the northern edge as the Fife hills of Old Red Sandstone. The low-lying central area is glacial deposit, apparent at the sand and gravel pits near Ladybank and Wormit. Most of Fife is Carboniferous sandstone and limestone but there and on the south coast are some good volcanic vents and flows.

Fife is dominated by farmland and there is little woodland or natural grassland but there is an increase in tree planting and areas of land turned into amenity grassland (e.g. golf courses) and larger field boundaries. However the coastline is extensive and varied with salt marshes, small estuaries, sand dunes and dune slacks. There are examples of volcanic vents at Burntisland and Kinghorn. The coastal flora is particularly deserving of mention, e.g. Earlsferry to Shell Bay (Geranium sanguineum, G. pratense, Artemisia maritima, Astragalus danicus, Crambe maritima, etc).

A variety of lochs and reservoirs have a variety of sedges and pondweeds: Lindores Loch, Clatto, Cullaloe, Fitty, Cameron, etc.

For a comprehensive account refer to Wild Flowers in Fife and Kinross. a concise checklist by George Ballantyne (2002).

Kinross-shire has been an entity in its own right since 1426 although it has undergone many boundary changes since. In the 1970s it was merged Perthshire to form the new Perth and Kinross District in the new region of Tayside; very recently it has been reinstated as ‘Kinross-shire’. It has long had an association with Fife and botanically this was endorsed by Watson when he drew up his divisions known as vice-counties about 1840, when v.c. 85 was designated Fife & Kinross. An apt if somewhat quaint description was made in 1905 by a local man, Hugh Haliburton, calling it the ‘Sleepy Hollow of Scotland’ – ‘hollow, though high, hemmed in on its four sides by the majestic Lomonds, dark Benarty, the serrated hills of Cleish and a portion of the long line of the pastoral Ochils’.

Where Fife revels in its long ornamental coastline, (known when inland coal mines and coastal barley where at their height as ‘a beggars mantle fringed with gold’), Kinross has Loch Leven, the largest stretch of freshwater in East Scotland. It contributes significantly to the v.c.’s botanical diversity, featuring populations of Holy Grass, Hierochloe odorata, Juncus filiformis, Ranunculus x levenensis, Limosella aquatica and others. The uplands have rarities in their glens, braes and lochans: several pondweeds, Potamogeton spp., Isoetes lacustris, sedges like C. laevigata, limosa & magellanica, Asplenium viride, Hymenophyllum wilsonii, Meum athamanticum plus various Hawkweeds, e.g. Hieracium dewari. Roads and burn sides have clumps of Rumex pseudoalpinus. An account of the Wild Flowers of Kinross was first drawn up by GHB in 1977 with a 2nd ed. in 1985 (o/p).

Resources for recorders in VC85

Photos of rare flora, those not on the recording list and other local or interesting specimens are being added where possible when they are confirmed for 2011 onwards on our Flickr page. 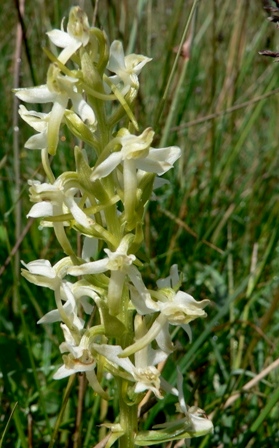